Small businesses can learn a lot from wolves.

They hunt together as a pack and the pack members are closely related by blood, affection and mutual aid - not just some random wolves that run across each other.

When businesses work together in coordinated marketing efforts, this is called co-marketing. It's a great way for companies to stretch their marketing dollars while expanding their reach. The efforts can be as formal as a co-branded campaign or product, or as informal as contributing to each other's blogs and social media to help build content.

Most businesses already have some type of tie with other businesses, whether in a B2B client/customer relationship, or through offering services or products that are complimentary.

With 2014 on the horizon, most business owners are thinking about New Year's resolutions. To help you along the way, I've come up with a list of 14 things (in no particular order) to think about in your 2014 marketing. This will kick off a series of blog posts where I explain the importance of each. See you in 2014!

How I knew healthcare.gov had problems within 5 seconds

Note: This post is not meant to take a position on either side of the Affordable Care Act debate, and is strictly about the website and its many problems.

I've been developing websites for 17 years and have learned over the years that when there are major problems with a site it usually comes down to 2 types of problems:

Healthcare.gov is the perfect storm of both of these types of problems.

I'm not referring to everyday problems common in site development, things like cross-browser compatibility, but fundamental problems in architecture and usability.

The day healthcare.gov launched I visited the site to see if a family member could save money on their policy. Within 5 seconds of being on the site I learned that all of my relative's personal data had to be submitted before I could get any idea of the price range. My reaction? Leave the site.

Poster design for Cantaloupe Festival is out of this world!

Glerin recently designed the poster for the 33rd Annual Virginia Cantaloupe Festival and brought a whole new look to the event.

Working with the Halifax County Chamber of Commerce, our goal was to start a new tradition of a collectible poster for all festival years beginning with 2013. This year's design has fun with changes in schedule and location from past years.

The festival is being moved to Berry Hill Resort, bringing back memories of the beautiful rolling hills that we enjoyed during the first years when it was originally held in Turbeville. Scheduling a month earlier to avoid the thunderstorms that have plagued past years resulted in a bit of local controversy since Halifax cantaloupes won't be ripe until the next month.

Never fear, though, because each festival-goer will receive a voucher good for one free cantaloupe from local growers.

After throwing around many concepts, we decided to go in a totally different direction than the festival had ever been and, having some fun with the controversy, went with the theme "The Melons Are Coming!"

The design team drew inspiration from old sci-fi movies and "The War of the Worlds" radio drama.

We've all heard the saying "beware the cost of the lowest price," and this also applies in design.  The best option doesn't necessarily have the highest price, but often the lowest priced option has the highest cost.  "How?," you ask... Let me share an experience I had today, and how poor usability cost Walmart a sale. Add enough of these sales up and it could be a substantial chunk of change, even for a company of that size. 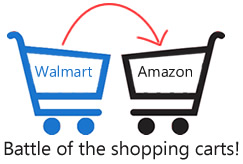 First off, remember that price is the sticker price of an item but true cost is arrived at by combining that price with what you stand to lose in sales, time, goodwill, efficiency, etc.

We needed an item for the office that wasn't available locally so I decided to order online.  I was on the road and a quick search on my phone gave the exact item I wanted for $99 at Walmart's online store.  Being in a hurry, I was prepared to order without shopping around.  The problem arose with the poor design of their mobile checkout process and Walmart's sale became Amazon's sale.

I chose the free "ship to store" option but in the next step found that the item wouldn't arrive until near the end of the month; the initial shipping options step didn't show the prices of the various paid options, so I went back to change to standard shipping to check the price & see how much quicker I could get it. The mobile checkout process didn't have the option of changing the shipping choice after it had been selected. I couldn't even select a new choice if I deleted the item from the cart and then re-added it.