Poster design for Cantaloupe Festival is out of this world! 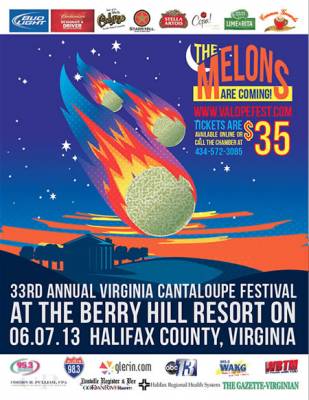 Glerin recently designed the poster for the 33rd Annual Virginia Cantaloupe Festival and brought a whole new look to the event.

Working with the Halifax County Chamber of Commerce, our goal was to start a new tradition of a collectible poster for all festival years beginning with 2013. This year's design has fun with changes in schedule and location from past years.

The festival is being moved to Berry Hill Resort, bringing back memories of the beautiful rolling hills that we enjoyed during the first years when it was originally held in Turbeville. Scheduling a month earlier to avoid the thunderstorms that have plagued past years resulted in a bit of local controversy since Halifax cantaloupes won't be ripe until the next month.

Never fear, though, because each festival-goer will receive a voucher good for one free cantaloupe from local growers.

After throwing around many concepts, we decided to go in a totally different direction than the festival had ever been and, having some fun with the controversy, went with the theme "The Melons Are Coming!"

The design team drew inspiration from old sci-fi movies and "The War of the Worlds" radio drama.