Will the Internet of Things pass your business by? 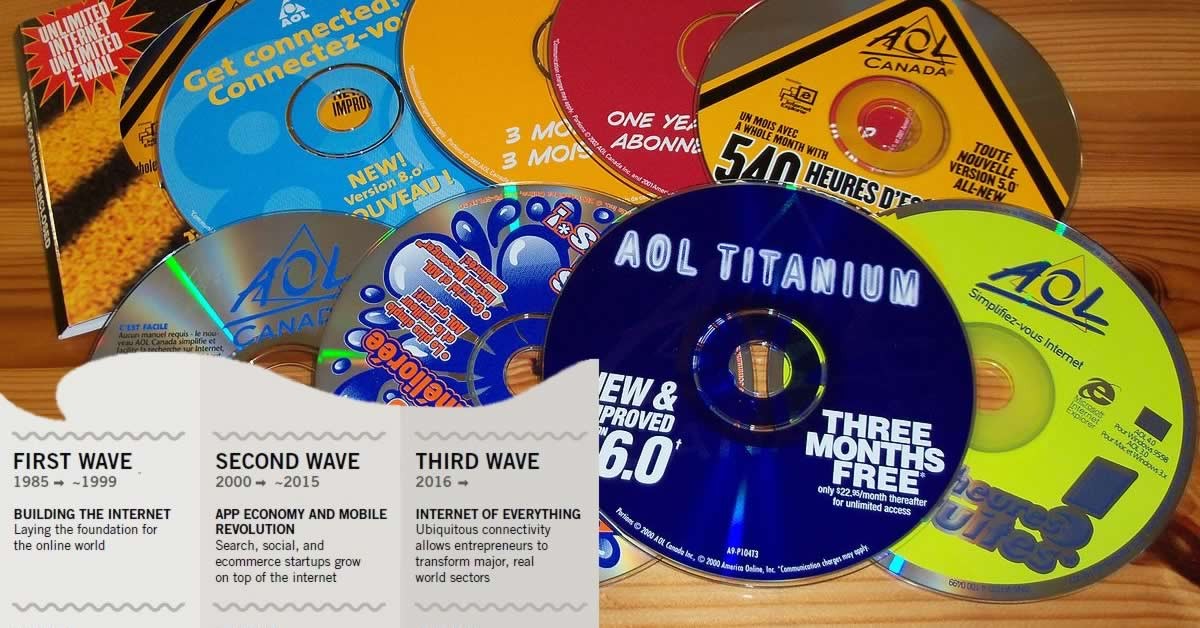 You may not know it, but we're already in the Third Wave of the internet, or the Internet of Things (IoT), as it's come to be known.

Yep, that's right, and if your business is typical of most, you're still stuck at the end of the First Wave – at best.

You're probably thinking “not only do I have no clue what the Third Wave is, but I don't even know what the First and Second were.”

Steve Case, founder of AOL explains it this way (summary shown in the photo above):

Take a minute and think about your business in relation to these three time periods. I'm willing to bet that, even if you have a website, you're not using it in a way that's anywhere close to being a part of the Third Wave. You probably have:

Although we're at the beginning of the Third Wave, too many people still look at their website as a separate entity rather than part of an interconnected ecosystem. In truth, the internet is a tool that any business can use in unlimited ways, most of which haven't even been thought of yet.

Think about the telephone.

Years after its invention, it was a luxury that few people or businesses had. When it became more common, there were still lots of users on party lines (if you're too young to have heard of that, it's multiple homes or businesses sharing a phone line and your neighbor had to hang up before you could use it unless you just wanted to listen in on their call.)

Next, the phone was everywhere; businesses and government were using it for marketing, customer service, and internal communications – and even as a platform for core products, as in the case of 900 numbers – and first responders were using it as a way for anyone to be able to report an emergency in a standard way.

Now we're at the stage where a generation of people have probably never heard a dialtone, and almost everyone has a mobile phone with them all the time – even children.

That's a huge leap and I think a good analogy for the internet.

If the internet were the phone, we would be at the beginning of the smart phone era - when the iPhone was first released, and the only people who had one were people like me who used it in their work or those who just like having the newest thing.

People are now glued to their mobile phones all the time, and many have replaced their computer with their mobile device. The phone is ubiquitous.

And that's not been that long ago.

For your business to survive and prosper you have to start thinking about the internet strategically and from a thousand-foot level. This is a must, not an option.

Some examples of solutions we've developed for clients over the years:

Those things may not sound very impressive now, but if you consider the time period we did them in, they were a rarity.

We worked with those clients to break down some of their most aggravating internal issues and develop a solution that saved time and money, and in the case of the sales staff, actually helped make money.

Now do yourself a favor and put on your thinking cap. Come up with some lists:

If you add to the list on a regular basis, you'll find that the more you think, the more your brain will become used to thinking creatively.

Before you know it, ideas will just begin to pop in your head at the oddest times because your brain will be working in the background looking at everything differently.

If you think you have an idea with legs, talk to your internal team to see how you can implement it or complete a project inquiry form to see if we may be a good fit for you.

And, whatever you do, never stop looking at things differently.

PS – did you know Alexander Graham Bell didn't invent the telephone? He stole the plans from an impoverished Florentine immigrant named Antonio Meucci. I learned that on the internet. Google it. ;)

Tags:
entrepreneur marketing web development internet creative thinking
Could your content disappear from the web?
4 ways your website design may be killing your SEO