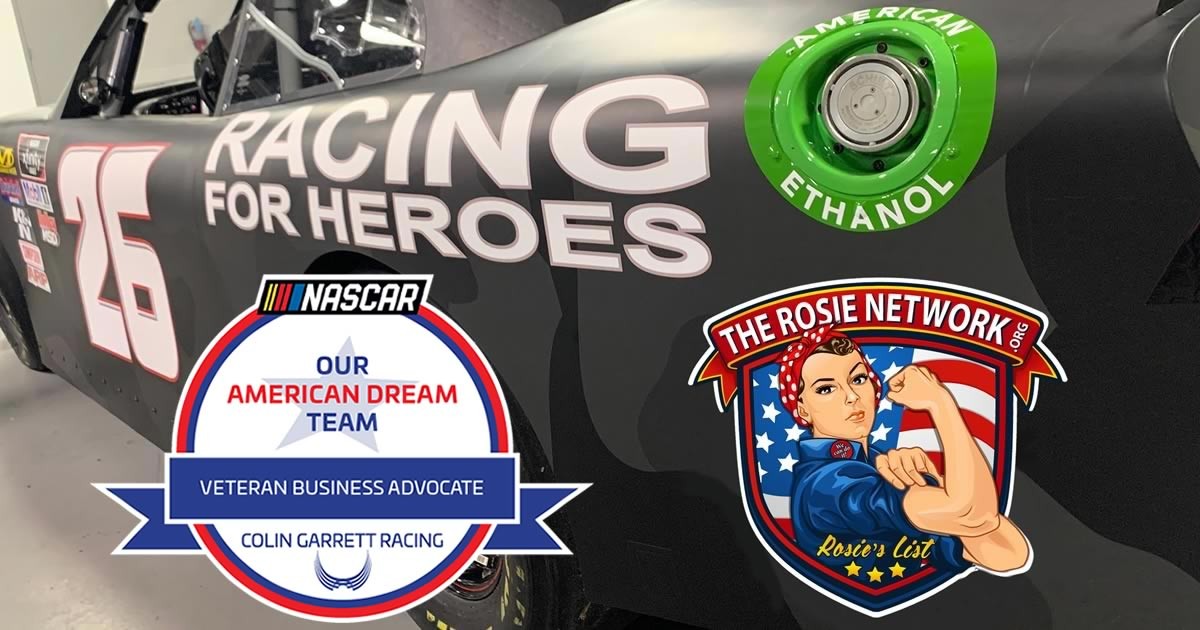 Our CEO, Lisa Kipps-Brown, is the mind behind the history-making crowdfunded NASCAR Xfinity racing team, Our American Dream Team. In early January the campaign exceeded the $200,000 goal to fund the new Xfinity team’s run at Daytona in February, and the team was able to set aside enough to pay for a veteran’s stem cell treatments.

Lisa developed the concept and strategy behind the team's race to help prevent Veteran suicide, starting with promoting Racing For Heroes pro bono in 2019 and expanding into crowdfunding for 2020.

Replacing corporate sponsors with crowdfunding backers allows NASCAR’s youngest duo, 19-year-old driver Colin Garrett and 26-year-old owner Sam Hunt, to run a car that’s 100% dedicated to preventing suicide in the military community and helping Veterans and military families live the American Dream they give so much to protect. Glerin developed the crowdfunding site.

The crowdfunded team promotes the free services of nonprofit Racing For Heroes to help spread awareness to those in need of mental and physical health services for traumatic brain injury and PTSD, and added The Rosie Network for 2020.

“After promoting Racing For Heroes pro bono throughout the 2019 season, we decided we wanted to expand that effort in 2020,” said Garrett. “We’ve added nonprofit The Rosie Network to the team this year, and our goal is for each crowdfunded race to not only promote the nonprofits but to also help fund their programs.” Crowdfunding allows the team to promote the nonprofits rather than traditional corporate sponsors. Both of Garrett’s brothers are Active Duty Army, with one currently deployed to Korea, making the cause personally important to him.

Racing For Heroes’ founder, retired Army Special Forces Mike Evock, said, “this is the first time I’ve ever seen a team use crowdfunding successfully to race, and this team is doing it to promote causes important to veterans and military families. Being able to pay for a veteran’s stem cell treatments out of the very first phase of crowdfunding is huge.”

Lisa Kipps-Brown is the wife of a retired Navy officer with 26 years of service. She developed the marketing strategy because of her desire to help the military community transition back into civilian life, many after multiple deployments in combat zones.

Stephanie Brown, founder of The Rosie Network, is the wife of a Navy SEAL who retired as Admiral with over 30 years of service. TRN provides no-cost entrepreneurial training to veterans and military spouses.

“We’ve developed a program with Colin and Sam to promote military family-owned small businesses who contribute as little as $10 to the crowdfunding campaign,” said Brown. “The businesses also get a badge to use in their marketing that designates them as a Veteran Business Advocate of Our American Dream Team. The Rosie Network’s role in the prevention of suicide is to help military families live the American Dream they’ve given so much to protect.”

Team owner Sam Hunt said, “being able to race at Daytona is what we all dream about, and getting to do it with a purpose much larger than NASCAR is really special.” One of his best friends is a Navy SEAL, making the cause personal to him as well.