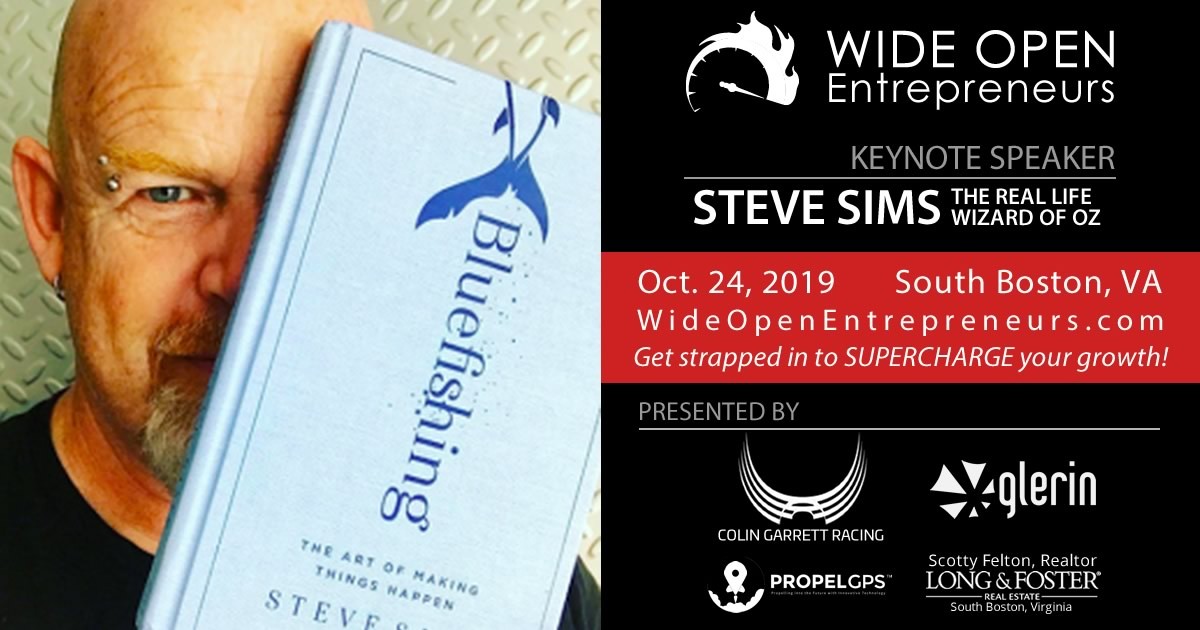 Steve Sims has worked with Elon Musk, Sir Richard Branson and Sir Elton John, to name a few. Now the man the rich and famous turn to when they want to see the wreck of the Titanic or sing on stage with their favorite rock band will be in the historic small town of South Boston, Virginia, on October 24 to headline the inaugural Wide Open Entrepreneurs Conference.

The one-day conference is geared towards entrepreneurs who are feeling stuck and want to “supercharge” their growth. Proceeds will benefit Racing For Heroes, a nonprofit based at Virginia International Raceway that combats the epidemic of Veteran suicide.

Dubbed the “Real Life Wizard of Oz” by FORBES and author of the bestselling book Bluefishing – the Art of Making Things Happen, Sims is known for “making the impossible possible.” If he can’t help you get unstuck, nobody can.

“Being an entrepreneur can be a lonely place to be,” says Sims. “It doesn’t need to be, though. Come where the creatives – those that won’t settle, those that demand more – hang out,” he adds, emphasizing the importance of learning from those who know how you feel.

VIP ticket holders will begin and end the conference at two exclusive events with the speakers, sponsors, and the founder of Racing For Heroes. They’ll kick off with dinner at the award-winning Molasses Grill in the Town of Halifax the night before, and wrap up with a cocktail reception and Q&A panel immediately after the conference. The very limited number of available VIP tickets also include special seating privileges for the conference.

Sims has personally selected six speakers who will cover the topics of building a personal brand, developing a command presence, perceived vs. reality of success, digital advertising, how to turn an idea into a million-dollar business, and activating your hidden potential.

The conference will be held October 24, 2019 at The Prizery Performing Arts Center in downtown South Boston, followed by an Evening Gala at Springfield Distillery.

For more information and to buy tickets, visit WideOpenEntrepreneurs.com.

Tags:
entrepreneur marketing
Crowdfunded NASCAR Team Pays For Veteran's Stem Ce...
Your business is at risk if you keep ignoring the ...