Envision the business of your dreams, and build it 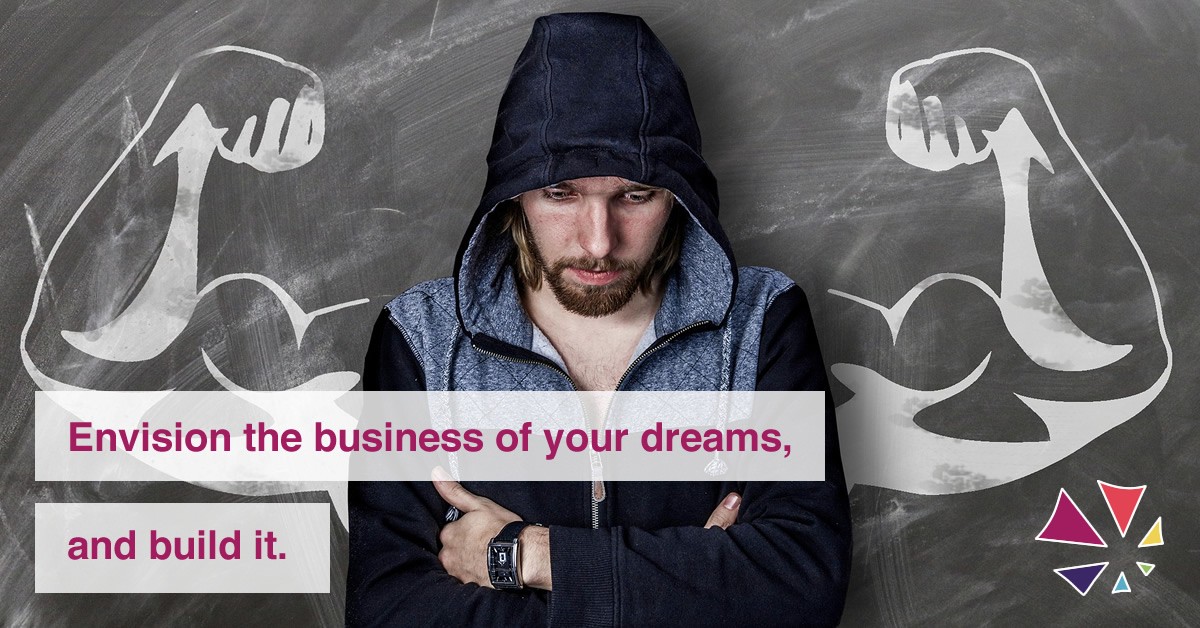 Keeping your nose to the grindstone makes it hard to see clearly, though, so I'm going to share some of my likes and dislikes, how I came to understand them, and how I used them to create my dream business. Hopefully this will help you envision yours.

Growing up, I had no clue what I wanted to do. All I knew was that I would eventually own my own business, but I didn't have any idea what it would be other than knowing it wouldn't be retail.

In college I kind of fell into Accounting because I was good at math, didn't want to be a teacher, didn't really know what else to do with it,and figured with Accounting I could make decent money. I was really good at it, too; even passed the CPA exam without studying, but it never got me excited.

My first job out of college was an Auditor. That didn't fit my personality because I come from a glass-half-full perspective and looking for things people did wrong wasn't fulfilling to me. Some of the people I worked with would get really excited when they thought they had “caught” someone, but to me it was blah and depressing.

Next up was working for a huge international manufacturing company in the Controller's area. I quickly found out more about what I didn't like, but not so much about what I did like. I realized just being able to see a tiny piece of the pie and not how everything fit together made the numbers mean nothing to me. Plus, I was so bored! I had my little piece to do, same thing every month, and not much to do in between except during budget season.

When I did my stint in one of the plants I was actually happier. It felt good to be close to things actually being made. It made the numbers not just be numbers; they turned into real things in my mind.

My third job was as an Assistant Controller with a luxury product manufacturing company and I loved it. I had never worked as hard, but I got to have my fingers in everything from financial to even some of the stuff on the manufacturing floor (trivia, I even had to approve a check from Tip O'Neill). I would have stayed with this job much longer, but got married and moved to another state.

When my husband was preparing to retire from the military, we decided to start a business rather than him get a position with a defense contractor because he really wanted something new. I had never done any type of marketing or sales before, but knew I had to get the business going before he retired so we would have enough cashflow to pay our bills.

With a 4-month-old, a 24-month-old, and no sales or marketing experience whatsoever, I made cold calls 8 hours a day on the phone. When he retired 4 months later he didn't even get to take a day off because I had built the business so quickly he needed to go to work! Poor thing :)

What I learned from this experience is that I loved marketing and sales! Marketing classes in college were always so boring to me, and I had always thought of sales as trying to convince people to buy something they didn't want. I couldn't have imagined myself ever doing either, but now I realized I was wrong.

We sold this business after several years because it tied us down too much, though.

Without going through all of the other details in between, I'll summarize what I finally understood about myself:

When I discovered web development in 1995 it was a Eureka moment. Everything I liked and didn't like came together!

In 1996 I gave up Accounting entirely and have owned Glerin ever since. It's funny that the longest I had ever been in a job or owned a business before that was 3 years, and now I've owned Glerin for over 21 years.

I've also used those talents, likes, and dislikes to adapt my business over the years. Guerilla Rampups™ are a direct result of my liking to brainstorm strategy and disliking things that drag out. I adapted my business to get rid of the parts I don't like and emphasize the parts I do like. It's still providing the same basic service to clients, but doing it in a way that suits my personality and makes me happy and less stressed.

So what's my point and how is it relevant to you?

Think back through all of your education, jobs, businesses owned, and even hobbies. Really think about what you like and don't like, similar to the things I listed above.

Now try to figure out how you can put all of those things together to adapt your own business to the one of your dreams. As I've said before, it's your business. You can do whatever you want!

One last thing - I always tell younger people who are stressing over what to study in college that it doesn't really matter as long as they're studying something they like, because the vast majority of people I know aren't working in the field they studied in college. What I'm doing didn't even exist then, so it would have been impossible to know I wanted to do it!

If you know a high school or college student who's obsessing over what they see as a lifelong decision, please pass along that thought. It's amazing how being able to let go of worry frees up your ability to really get to know yourself and imagine possibilities, and usually helps achieve clarity.